skip to main | skip to sidebar

48) USA-China relationship and the problem of Tibet: always a contentious issue... 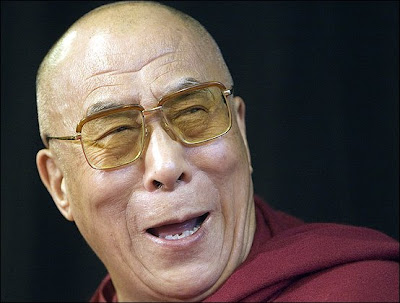 The Dalai Lama, shown Saturday in Montreal, will be in Washington this week. It will be his first visit since 1991 in which he has not met with the president.
Photo Credit: By Ryan Remiorz -- Associated Press

Obama's Meeting With the Dalai Lama Is Delayed
Move Appears to Be A Nod to Chinese
John Pomfret
Washington Post, Monday, October 5, 2009

In an attempt to gain favor with China, the United States pressured Tibetan representatives to postpone a meeting between the Dalai Lama and President Obama until after Obama's summit with his Chinese counterpart, Hu Jintao, scheduled for next month, according to diplomats, government officials and other sources familiar with the talks.

For the first time since 1991, the Tibetan spiritual leader will visit Washington this week and not meet with the president. Since 1991, he has been here 10 times. Most times the meetings have been "drop-in" visits at the White House. The last time he was here, in 2007, however, George W. Bush became the first sitting president to meet with him publicly, at a ceremony at the Capitol in which he awarded the Dalai Lama the Congressional Gold Medal, Congress's highest civilian award.

The U.S. decision to postpone the meeting appears to be part of a strategy to improve ties with China that also includes soft-pedaling criticism of China's human rights and financial policies as well as backing efforts to elevate China's position in international institutions, such as the International Monetary Fund. Obama administration officials have termed the new policy "strategic reassurance," which entails the U.S. government taking steps to convince China that it is not out to contain the emerging Asian power.

Before a visit to China in February, for example, Secretary of State Hillary Rodham Clinton said advocacy for human rights could not "interfere with the global economic crisis, the global climate-change crisis and the security crisis" -- a statement that won her much goodwill in Beijing. U.S. Treasury officials have also stopped accusing China of artificially deflating the value of its currency to make its exports more attractive.

In explaining their reluctance to meet the Dalai Lama now, U.S. officials told Tibetan representatives that they wanted to work with China on critical issues, including nuclear weapons proliferation in North Korea and Iran, said an Asian diplomat with direct knowledge of the talks who spoke on the condition of anonymity because of the sensitivity of the subject. Administration officials also hinted that they were considering selling a new tranche of weapons to Taiwan, which China claims as its own territory.

"They were worried about too many irritating factors all at once," said the Asian diplomat. "They didn't want to have too many things straining the relationship." What is not clear is whether the administration was bending to specific Chinese demands or whether it decided unilaterally, in the words of one participant in the talks, "to throw the Chinese a bone."

A senior administration official denied that the Dalai Lama had sought a meeting with Obama in October and "instead he would like to see him in December." He said it was "counter-factual" to assume that a meeting had been postponed. The official briefed a reporter on the condition that his name not be used.

U.S. officials also said they are not pulling punches with the Chinese. They have, however, indicated that they want to try something new on Tibet, figuring that the old policy -- of meeting with the Dalai Lama regularly and calling for substantive talks between China and his representatives -- had achieved little. American officials told Tibetan representatives that "this president is not interested in symbolism or photo ops but in deliverables," the Asian diplomat said. "He wants something to come out of his efforts over Tibet, rather than just checking a box."

Talks between China and representatives of the Dalai Lama, who fled China in 1959 after an anti-Chinese uprising, collapsed in 2008. There are signs that they might resume soon.

What Did China Think?
U.S. officials began to express doubts about the meeting between the Dalai Lama and Obama soon after the Group of 20 meeting in April when the United States and China agreed that Obama would visit Beijing later this year, the Asian diplomat said.

Before that White House and State Department officials had told Tibetan representatives that it was simply a matter of finding the right day, the Asian diplomat said. "They said they would live with the meeting, would live with the Chinese being upset," he said. "But then there was strong push-back."

The Tibetan representatives did not bend initially. So in May, retired U.S. diplomats got involved, meeting with prominent American friends of the Tibetan movement in an attempt to get them to exert pressure on the Dalai Lama and his representatives to relent, according to sources with direct knowledge of these interventions. Meanwhile, a string of Chinese delegations began contacting American academics and others close to the Tibetan movement in an effort to gauge whether Obama would have the meeting, said people who met with the Chinese. Ironically, according to participants in these talks, the Chinese had come to the conclusion that Obama was going to meet with the Dalai Lama in October and that the only issue was how the Tibetan leader would be received in the White House.

"We've got the classic case of a Western government yet again conceding to Chinese pressure that is imaginary long after that Chinese pressure has ceased to exist," said Robert Barnett, a Tibetan expert at Columbia University. "The Chinese must be falling over themselves with astonishment at what Western diplomats will give them without being asked. I don't know what the poker analogy would be. 'Please, see all my cards and take my money, too?' "

In August, Tibetan representatives laid out the issue for the Dalai Lama. There were dangers if he gave in to American pressure, the Asian diplomat said. One, it "could set a precedent and make China feel even more arrogant than it already is," the diplomat said. Two, it could make it more difficult for the Dalai Lama to meet with the heads of state of other countries. China has launched a worldwide effort to stop heads of state from hosting the Tibetan leader. The Dalai Lama is to travel to New Zealand and Australia later this year and has yet to secure a commitment from their leaders to meet. "A lot of smaller countries will have the best excuse," he said. "They'll say, 'Give us a break. How about the big United States?' "

Finally, Tibetan officials worried about how Chinese authorities would portray the victory in China. "They would obviously tell the people of Tibet that His Holiness was rejected in Washington," the Asian diplomat said.

Official Response
In late August, Lodi Gyari, the Dalai Lama's representative in Washington, met with Valerie Jarrett, senior adviser and assistant to Obama, before she traveled to Dharmsala, India, the seat of the Tibetan government-in-exile. Gyari tried again to persuade the administration to accept a meeting in October.

It didn't work. A second senior administration official pointed to Jarrett's visit to Dharmsala as a sign of how much Obama cares about Tibet.

Jarrett met with the Dalai Lama on Sept. 13 and 14. The office of the Dalai Lama issued a positive statement about the meeting. In the third paragraph from the bottom was the sentence: "His Holiness is looking forward to meeting President Obama after his visit to China." The operative word was "after."
Posted by Paulo Roberto de Almeida at 10/05/2009 07:22:00 AM

Comments are useful, provided that they refer exactly to the subject of the post, and present some relevant argument.
Comentários são bem-vindos, desde que relativos ao tema do post e apresentando argumentos substantivos.

Welcome to this blog

This blog is devoted to the emerging region of Asia Pacific, in special China and the surrounding contries.
Shanghai Express was the title of a novel (1935) by the Chinese writer Zhang Henshui (1895-1967), settled in a train, during the "roaring twenties", symbolizing modernity, rapidity and progress.